An Entrepreneur Full of Energy

Ahmed Fathelbab is Managing Director of the steel firm El Fateh. Together with a mechanical engineer whom he got to know in Germany, he is implementing several projects in Africa and Germany at the same time. In addition, the dynamic businessman founded a new firm during the MP that produces biofuel.

El Fateh is strong in the area of steel structures. The firm, with its 450 employees and an annual turnover of €10 million, has made a name for itself in Egypt through large projects such as the Sharm el-Sheikh International Airport. Renowned partners like Siemens place their trust in the steel manufacturer from Cairo. Most recently, El Fateh supported the global player from Europe in the construction of a steam power plant in Asyut.

In Germany, Fathelbab was looking for general contractors who deliver turnkey buildings to customers. In this regard, he wanted to offer his services as a partner for construction projects in Africa or Europe. Establishing contact with a family business in Düsseldorf has led to several joint projects. The two partners are currently building a cement factory in Ruanda plus a cooling tower in Germany for a chemical firm. The next project has already been lined up: Fathelbab has concluded a cooperation agreement with a plant manufacturer in Germany for a multi-million project in Mali. Work is planned to begin in 2020.

Through the MP, Fathelbab has been able to increase El Fateh’s export rate from 20 per cent to 30 per cent. He plans to increase it to 60 per cent in the coming years, with a stronger focus on the European market. Besides Germany, Fathelbab has activities in Italy and the Netherlands. The internationalisation is bringing him not only growth, but also greater independence from the volatile Egyptian market.

Through various channels, Fathelbab got to know an environmental technician during the MP. With this technician’s support, he founded Bidaya in Luxor, a firm that is anything but a “waste product” from the Programme – even though it does deal with waste. Bidaya produces agricultural ethanol from biomass. Siemens with its gas power plant in Asyut is the main purchaser of the alternative energy carrier.

For almost a year now, Bidaya has been operating in Luxor, a city located on the east bank of the Nile in Upper Egypt. The biofuel produced in the plant originates mainly from agricultural waste. “We are among the first factories in Egypt producing bioethanol”, Ahmed Fathelbab, Managing Director of the firm proudly says. The MP alumnus invested €500,000 in the enterprise, which produces 5,000 tonnes of the alternative fuel a year. He used part of the money to buy a firm that disposes of agricultural waste − now this biomass is converted into biofuel. Forty employees are responsible for its smooth operation. Fathelbab designed the equipment for extracting the bioethanol together with his new partner and had it manufactured by El Fateh. 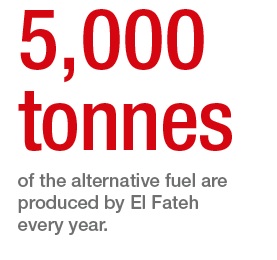 “Power plants and cement factories require large amounts of energy. With our biofuel, we can reduce their expenditure on energy”, says Fathelbab. The 33-yearold entrepreneur currently exclusively supplies his biofuel to the Siemens power plant, which he helped to build. The manager plans to expand his production capacity because there is strong potential in Egypt and other African countries investing in the improvement of their energy supply at the moment. A stable supply of energy is essential for these countries to also develop their economies. Through Bidaya, Fathelbab is making his contribution.